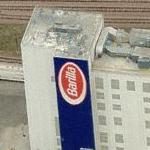 Ibanezrg270
@ 2013-12-02 19:34:23
Thats a good one. My family runs a commercial roofing business we roofed all but that lower section last year and the year before. great view from up there and a neat place too!
www.sadlercoatingsystems.com