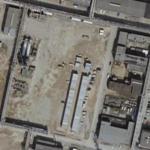 The Live Local pictures are from about the year 2001 and the Google Maps (Earth) pics are from January 2006.

The compressor house was part of the 'Hydrierwerk-Scholven' (Hydrogenation plant) since about the year 1935.

Primary task of this plant was the production of gasolene from coal for the German 'Wehrmacht'.