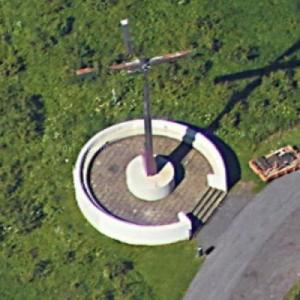 By kjfitz @ 2011-09-24 09:40:15
@ 50.79935404, 6.13926966
Aachen, Germany (DE)
The Battle of Crucifix Hill was a World War II battle that took place on 8 October 1944, on Crucifix Hill (Haarberg) (Hill 239), next to the village of Haaren in Germany and was a part of the U.S. 1st Division′s campaign to seize Aachen, Germany. The Battle of Aachen was part of the Drive to the Siegfried Line. The hill was named after a large crucifix mounted on the top of the hill. The objective of the battle was to gain control of the hill, which was laced with a maze of pillboxes and bunkers, so that the main objective of encircling Aachen could be completed. The hill was held by units of the German 246. Volksgrenadierdivision.
Links: en.wikipedia.org
2,098 views

Anonymous
@ 2018-05-15 11:49:08
Research led me to your entry concerning Crucifix Hill. A relative of mine died in the assault on the pillbox at Hill 239. Edwin Wilkerson, PFC 18th Infantry Reg. had survived landing on Normandy Beach Easy Red beach. The fighting through France and into Belgium. On the 8th of October, 1944 PFC Wilkerson Bronze star and purple heart with oak leaf cluster died in the attack on the hill. Thank you for your service and ultimate sacrifice.