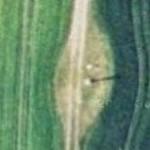 The battle of Grathe (Grey) Heath on 23 October 1157 marked the end of a civil war between Sweyn III, Canute V and Valdemar I the Great, all contenders for the Danish throne. After Eric III of Denmark had abdicated in 1146, Sweyn III, son of Eric Emune, was declared king of Zealand and Scania, while Canute, son of king Magnus, became king of Jutland. Canute made several attempts to conquer Zealand (1147 and 1150), but was driven off and fled to Germany, where he managed to raise an army.

In 1152, a battle was fought at Gedebæk, close to Viborg. Canute lost and appealed to the German king (later emperor), Frederic I Barbarossa, who commanded both kings to meet him at Merseburg. Here, Frederic confirmed Sweyn's rights of kingship, and Sweyn swore fealty to him.

The nobles of Denmark were getting worried about the growing German influence. Valdemar, having at first joined Sweyn, who had made him duke of Schleswig, changed sides and was betrothed to Canute's half-sister Sophie.

Both Canute and Sweyn were hailed as kings at the Landsting in Viborg in 1154.

People flocked to Valdemar's banner when Sweyn's treachery was revealed, and he gathered a great host. Sweyn landed at Grenå (at the mouth of the Djurså stream), but his fleet was destroyed by a combination of force and guile. Sweyn marched upon Randers and Valdemar retreated to the other side of the Gudenå river and tore down the bridge.

At the end of September Valdemar felt that he was powerful enough to face Sweyn's army, and on 23 October the two armies met at Grathe Heath. The battle was short, but vicious. Sweyn failed to locate Valdemar's main force, and was suddenly attacked with such force that he fled his army. He blundered into the swampy areas at one end of the Hauge Lake, and lost his weapons and armour. Shortly afterwards, he was captured and killed with an axe, according to tradition, by angry peasants.

After his death, Sweyn was nicknamed Grathe, after the place where he lost both his crown and his life.

After the battle Sweyn was buried here and later a small chapel was build to honour him. 1536, after the Reformation, the chapel was demolished and the stones were used for the nearby farm Grågård. 1930 stones were also used to build the neaby tower of Grathe Church.

1891 the chapel was excavated at a grave with the skeleton of a toll man with scull fractures was foun. The grave of Sweyn.