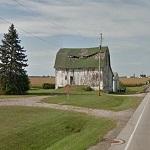 By tallturtle82 @ 2015-12-14 07:47:17
@ 41.6999272, -84.0368101
Lyons, Ohio (OH), US
The Battle of Phillips Corners was a bloodless battle during the almost bloodless war in which the states of Michigan and Ohio fought over the territory known as the "Toledo territory". Between 1787 and 1805 both state's legislatures passed law claiming sovereignty of the 468-square-mile (1,210 km) strip of land. Tensions raised as both states raised militias as neither were willing to back down. There were no casualties in the war and the closest thing to violence occurred at Phillips Corner when the Michigan militia fired shots into the air to scare away the Ohio surveyors.

In 1836 Congress resolved the dispute by giving Michigan most of the upper peninsula of what is now Michigan if they relinquished their claim on the Toledo strip. The deal was struck and Michigan who initially felt swindled ended up reaping the benefits of the timber, copper and iron of the upper peninsula.
Links: en.wikipedia.org
834 views