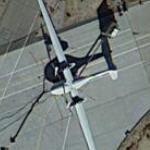 The aircraft is Boeing’s proposal to meet the demand from the US military for unmanned drones designed to provide advanced intelligence and reconnaissance work, driven by the combat conditions in Afghanistan in particular.

The demonstrator was shipped to NASA's Dryden Flight Research Center at Edwards Air Force Base, California, for ground tests. It conducted its first medium-speed taxi test there on March 10, 2012, reaching speeds of 30 knots. Boeing declared the test a success and said it paved the way for the aircraft's first flight, expected to last 8 hours.

The Phantom Eye completed its first flight on June 1, 2012 at Edwards Air Force Base. It reached a altitude of 4,000 ft and a speed of 62 knots or 115 km/h for 28 minutes. Phantom Eye's landing gear dug into the dry lakebed and caused some damage to the aircraft.
Links: en.wikipedia.org
1,119 views