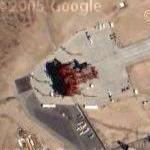 By kjfitz @ 2006-01-10 10:27:56
@ 34.958611, -117.883816
Edwards AFB, California (CA), US
The Space Shuttle Mate-Demate Device (MDD) at NASA's Dryden Flight Research Center, Edwards, Calif., is a large gantry-like steel structure used to hoist the orbiters off the ground during post-landing servicing operations and during mating and demating operations with the 747 Shuttle Carrier Aircraft (SCA).

Dryden and Kennedy are home to NASA's two MDDs. Dryden's MDD is more complex than the one at Cape Canaveral, D'Agostino said, because the one here is used as a work site for tasks that, when they are necessary in Florida are accomplished at Kennedy's Orbiter Processing Facility. Dryden's structure is similar to its Florida twin, but the Dryden MDD has elevators and had extra equipment built into it that was required in the early days of the shuttle program. The modifications were made largely to enable the device to meet heavy-lift requirements as the shuttle program progressed.

What started out as one of the world's largest Erector sets became a permanent structure at Dryden as the needs of the space shuttle program changed and required welds, concrete and additional work platforms and heavier lift capability.
Links: www.nasa.gov
1,640 views