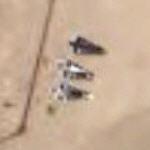 After completing its Photo Reconnaissance mission, the D-21 flew to friendly territory and the camera was ejected. The cameras were then recovered in flight by a C-130 mid-air recovery system afterwards, the D-21 drone would self-destruct at a low altitude. The program was cancelled after D-21 launch failed and detroyed an A12.

The D-21 program was later modified to be launched from a B-52H Stratofortress. Five operational missions were flown in this configuration over China. Operations ceased due to political reasons, cost and difficulty of operation.