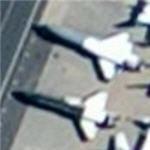 It was intended to be an autonomous pilotless craft powered by a 'Fastrac' liquid rocket engine capable of reaching Mach 8, and performing 25 test flights per year. The unpowered prototype had only been used for towing and captive flight tests when the project was canceled in 2001 for cost concerns. Orbital and Rockwell withdrew less than a year after the contract was signed, because they decided the project could not be done for the promised amount. (A major disagreement between Rockwell and NASA over engine choice likely contributed to the decision.)

The X-34 was reborn as a program for a suborbital reusable-rocket technology demonstrator. But when the first flight vehicle was near completion, the program died after NASA demanded sizable design changes without providing any new funding, and the contractor, Orbital Sciences, refused.

The two demonstrators remained in storage at Edwards Air Force Base until November 16, 2010, when both X-34s were moved with their vertical tails removed from Dryden to a hangar owned by the National Test Pilot school in Mojave, California. They are to be inspected, and NASA is investigating the possibility of restoring them to flight status.
Links: en.wikipedia.org
1,263 views