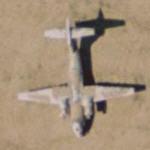 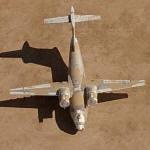 By kjfitz @ 2006-01-18 17:28:33
@ 32.171962, -110.847359
Tucson, Arizona (AZ), US
The YC-14 was Boeing's entry into the USAF's Advanced Medium STOL Transport (AMST) competition, to replace the C-130 Hercules as the USAF's standard STOL tactical transport. The AMST project introduced a number of innovative features, such as under-surface blowing, which used double-slotted flaps to direct part of the jet exhaust downwards, while the rest of the exhaust passed through and downward over the flaps, introducing the Coandă effect.

The unusual location of the General Electric F103 engines, seen only on a few other aircraft, such as the Antonov An-72 'Coaler' (which flew later), increased lift by passing the exhaust directly over the wing. This also made the aircraft quieter.

The YC-14, as well as McDonnell-Douglas' entry into the competition, the YC-15, met or exceeded the specifications of the contest. However, the project was cancelled before either product could be chosen.

Two YC-14s were built and tested. One is stored at the Aerospace Maintenance and Regeneration Center at Davis-Monthan Air Force Base; the other is on display at the nearby Pima Air & Space Museum.