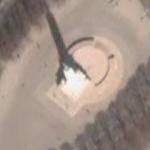 This monument is located in downtown Riga, Latvia, Brìvìbas street, dedicated "To Fatherland and Freedom".

The Monument was executed by Kârlis Zâle (1888-1942), a well-known Latvian sculptor. Ernests Shtalbergs was the architect . The 42 meter high monument is topped by a Liberty Statue - a woman with three stars symbolizing regional parts of Latvia: Kurzeme, Vidzeme and Latgale. At the base of the monument are several sculptural groups symbolizing different values - Labor, Strength of the Nation, Spiritual Strength, Freedom, Family; relief on the lowest block represents historical events.

The Freedom Monument was unveiled in 1935 during Latvia's brief period of independence between the wars. Known locally as Milda, it was a powerful symbol of anti-Soviet resistance serving as the focus of gatherings in the late 1980's during early stages of the drive for independence. It is puzzling why the Soviets did not tear it down, but certainly the natives' predictable wrath was a deterent. Now it is a shrine to national independence.

People still bring flowers to the monument which are tended to by the city's elderly women. During the Soviet era, a running joke, not completely untrue, was that the monument was a travel agency, because anyone who dared place flowers at its base got a free, one-way ticket to faraway Siberia.
Links: www.endex.com, en.wikipedia.org
1,337 views