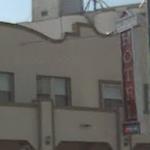 The Burge is noted for the role it played in the history of Holyoke.

When it opened, it was called the Sawyer House and eventually became
the Sears Hotel. Rooms were available to railroad employees,
construction crews and harvest crews.

Architecturally, the Burge is in the Mission Revival style that was popular between 1910 and 1925 during the Craftsman Movement.

Inside is an unusual fireplace that was dedicated in 1929. It is made up of
various stones, fossils and historical objects that were donated by more
than 200 people. It includes things such as a cannon ball from the
Civil War, arrowheads, the tooth of an extinct mastodon, petrified wood,
crystals and lava."
--http://www.coloradopreservation.org
463 views