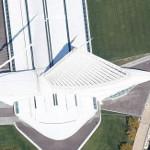 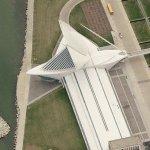 With fin size ranging in length from 26 to 105 feet, the Brise Soleil wingspan spreads 217 feet at its widest point, wider than a Boeing 747-400 airplane, and weighs 90 tons. Unprecedented in American architecture, the Burke Brise Soleil’s design is also unique among the moveable structures Calatrava has created in Europe.
Links: www.mam.org
1,426 views