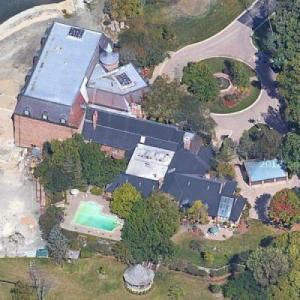 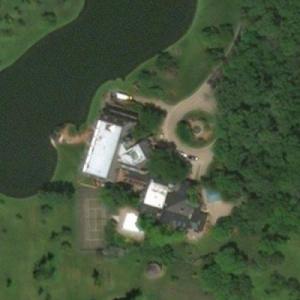 By Turneasterne @ 2012-01-08 22:45:40
@ 42.17972887, -88.21114034
Barrington, Illinois (IL), US
This is the home of Jasper B. Sanfilippo and Marian Sanfilippo, located in the village of Barrington Hills, IL, an independent village of Barrington, IL. John B. Sanfilippo & Son, Inc. is a publicly traded company on the NASDAQ stock market under the ticker, JBSS, and is a processor and marketer of tree nuts and peanuts in the United States. Its principal products are raw and processed nuts, and it is the parent company of Fisher Nuts. Mr. Sanfilippo was the chairman and CEO of John B. Sanfilippo and Sons Inc., and he worked with the company for his entire professional career, starting in 1953 until his retirement in 2008. He currently holds the title of Chairman Emeritus and is a Director at the company.

The house sits on 57 acres bordering a stream with a house that was originally built in 1974 at about 6,000 square feet. They added a 1,700 square foot music room, but in the late 1980′s a decision was made to add a huge music room addition on and one that would have room for a balcony and a new pipe organ of 5 manuals and 80 ranks. The new wing was completed in the French Empire style in 1992 and brought the total square footage of the mega mansion to around 44,000, with the he main living quarters measuring in at 20,486 square feet.

The primary motive behind his collection is the preservation and sharing of the experience of these marvelous inventions of the Western World. The 44,000 square foot mansion, home to collector Jasper Sanfilippo, is also a private museum designed as a complementary setting for the display and demonstration of these musical instruments within a temperature-controlled environment. The large scale of the rooms accommodates the great number of instruments and sizable audiences.

The village of Barrington Hills is located northwest of Chicago and spans four counties - Cook, McHenry, Lake and DuPage. It is the home of the horse farms Hill 'N Dale Farms and Horizon Farms, as well as the host of the annual Barrington Horse Show. The property is on the list of the top 10 residential tax payers in Barrington Hills. This list is comprised of residents such as real estate developer William Kaper, Jr. and soft drink industry veteran Marvin Herb.
Links: www.sanfilippofoundation.org, theatreorgans.com, www.eventbrite.com, en.wikipedia.org
9,242 views

Anonymous
@ 2019-01-21 10:46:03
Absolutely beautiful the collection Jasper and family have on his estate..This would be worth a trip to Illinois just to see the collection and ride that carousel. We jsut watched all of it on t.v. this morning..