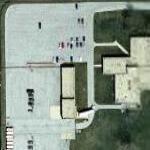 kjfitz
@ 2005-12-08 10:34:02
I'm sorry but you are wrong about this not being C-50L (the L being for "Launch." You may have grown up outside a former Nike missile site but it wasn't C-50L. Multiple listings of this site have it here and the pad is clearly a Nike Launch pad. Those same listings have the command center west of Illinois 11 and North of 178th street which would be consistent with a site 3/4 of a mile to the NW.

This would be the C-150C command center.

I suspect you lived near the control center. Each site has a launch facility and a command and control center. There were also radar facilities associated with each and often housing facilities. Each was colloquially referred to as "a nike site."

If you'll post the address or coordinates I can track down what the records have on the site you lived next door to.

Nadin2
@ 2011-01-14 13:30:28
I lived on 186th st south. There was a corn field across the street from my house and in the SE section of the corn field was a Nike installation. I remember when they lit off the radars my portable radio in my room would go zweep, zweep, zweep as the air search radar turned.

Later, the cornfield was turned into housing - but I moved from there in 1958 and never saw the field completely filled.

The Army had bought a lot of the land and wanted to build Capehart Housing ( reference: http://www.achp.gov/army-capehartwherry.html) for the service members and their families. My father was commissioned by the city of Homewood to go to Washington and lobby for a better designed housing project. (He was an active duty reserve officer in the transportation corp) He succeeded and they built a better designed housing community. I do not recall what the final design type was.

It is only now that I find out that the Homewood site (corner of 187th st. south and Rt 1) was called C-50. I never knew it had a name other than "Nike Missle Site".

Anonymous
@ 2020-05-12 18:38:17
I grew up next to the site as well, and this is it. I grew up on Poplar. When the launch site was deactivated, a good portion of it was made into Apollo Park, anther portion into a rehab center, while the parcel right behind the rehab center remains, to this day, a military reserve site. The latter is probably due to the expense of environmental clean up.

The radar portion remained as a reserve facility for years, until Homewood was allowed to purchase it, and convert it into Patriot's Park.