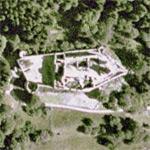 1646: burned down along with the castle of Eisenberg and Falkenstein

1805: became Bavarian through the treaty of Pressburg
Links: de.wikipedia.org
831 views