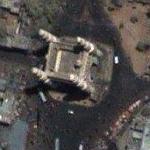 By Hinkkanen @ 2006-02-24 13:13:09
@ 17.361708, 78.474408
Hyderabad, India (IN)
Charminar is one of the most important landmarks of the city. The monument was built by Muhammad Quli Qutb Shah in 1591 to commemorate the eradication of plague, shortly after he had shifted his capital from Golconda to what now is known as Hyderabad. Legends tell that the emperor Quli Qutb Shah prayed for the end of plague and took the vow to build a mosque on that very place. He ordered the construction of the mosque which became popular as Charminar because of its four characteristic minarets. The top floor of the four-storeyed structure has a mosque which has 45 covered prayer spaces and some open space to accommodate more people in Friday prayers.
Links: en.wikipedia.org
1,795 views