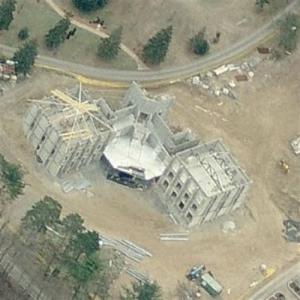 By jdubble07 @ 2016-07-16 12:07:18
@ 40.8704853, -75.32112939
Saylorsburg, Pennsylvania (PA), US
Fethullah Gülen is a Turkish former Imam, writer, and political figure who is under self-exile, living in Saylorsburg, Pennsylvania. He built this residence on the campus of his Golden Generation Worship and Retreat Center where he teaches his social and religious Gülen movement.

Following the 15 JUL 2016 attempted coup of Turkish President Recep Tayyip Erdogan, members of the Turkish government have called on President Barack Obama to extradite Gülen to Turkey to face claims in Turkey that he was responsible for the coup which left 161 dead and 1,440 wounded with 2,839 plotters detained.

In November 2017, it was reported by the New York Times, that Turkish President Recep Tayyip Erdoğan had offered Donald Trump's national security advisor, Michael Flynn, $15M to kidnap Gülen, put him on a private jet, and send him to the Turkish prison island of Imrali.
Links: en.wikipedia.org
5,263 views