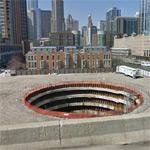 By neotrix @ 2008-02-13 06:32:53
@ 41.889827, -87.614239
Chicago, Illinois (IL), US
The Chicago Spire was a supertall skyscraper under construction in Chicago, Illinois. The building was designed by Spanish architect Santiago Calatrava and was being developed by Garrett Kelleher of Shelbourne Development Group, Inc

Originally commissioned by Christopher Carley, the building site for the project was purchased by Irish developer Garrett Kelleher in July 2006 when Carley's financing plans fell through. Construction of the building was to begin in August 2007, for intended completion in 2011. The Chicago Spire would have been the tallest building in North America. The project was canceled in early 2010.
Links: en.wikipedia.org
3,647 views

kjfitz
@ 2008-02-13 10:21:56
Please don't mix thumbnail submissions for Street View (GM-SV) thumbs and other thumbs. For now GM-SV submissions should only have one thumbnail - the GM-SV thumb.

It is OK to submit one site two times (i.e. duplicates ARE allowed), one for GM, LL/BEV and YM, and one for GM-SV.