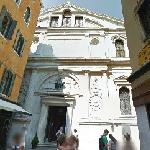 It is situated on the Merceria, the main shopping street of the city. Originally a structure from the 9th century; it underwent a number of reconstructions, including likely after the 1105 fire of the neighborhood. The façade was constructed in 1553-1554 by Jacopo Sansovino, and completed after his death in 1570 by Alessandro Vittoria.

The flattened classical temple façade was paid for by the scholar Tommaso Rangone, whose bronze seated portrait appears above the door. In his hands, the physician Rangone holds sarsaparilla and guaiacum, two plants which he used to treat syphilis and yellow fever. The reliefs also depict a map of the world as was known at his death. As befitting his broad-ranging interests in classic texts, the flanking inscriptions are in Latin (center), Greek (right) and Hebrew (left) text.

The interior was also designed by Sansovino, and the church consecrated in 1580.
Links: en.wikipedia.org
629 views