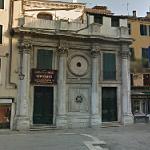 According to the Venetian historian Flaminio Corner, the church was erected in the year 1079. It was rebuilt after fires in 1105 and again in 1661, the latter to a design by Baldassarre Longhena. Located nearby the St. Mark's Clocktower, it has a side façade on the Piazza San Marco. It has four Corinthian columns and two single mullioned windows.

In 1806, during the Napoleonic occupation, the church was closed and sold to a private source. In 1847 it was ceded to the Basilica di San Marco, which used it to store marbles and sculptures until, in the 1890s, it was restored as a meeting and concert hall.
Links: en.wikipedia.org
480 views