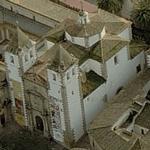 The church is commonly known as "The Precious Blood", where Jesuit priest of the nearby "House of the Sun" officiate masses.

The last part of the complex of this plaza is the "House of Vargas-Figueroa", which was the living quarters of one of its most pretigious priests.
Links: structurae.net
663 views