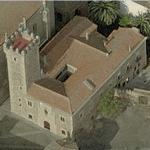 Today, it houses the military governance and it corresponds with the House of the Casa de los Cáceres Ovando.

This defensive tower was the only one allowed to be erected during the reign of the Catholic Kings, which couriously it was a time when they ordered the destruction of all of the other towers to teach the rebel lords a lesson due to their arrognace.
551 views