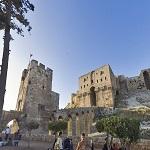 In 1986 the Citadel along with the ancient city of Aleppo became a UNESCO World Heritage Site.

**As a result of the Syrian civil war the citadel has seen significant damage.