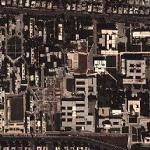 On 15 January 2013, people were killed by two explosions at the campus. The blasts reportedly struck an area between Aleppo University's halls of residence and the architecture faculty. The initial death toll was 52, but Aleppo's governor said 82 people were killed.