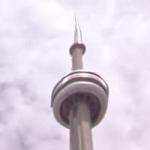 By kjfitz @ 2009-10-07 11:28:16
@ 43.640892, -79.387483
Toronto, Canada (CA)
The CN Tower, located in downtown Toronto, Ontario, Canada, is a communications and observation tower standing 553.33 metres (1,815.4 ft) tall. It surpassed the height of the Ostankino Tower while still under construction in 1975, becoming the tallest free-standing structure on land in the world. On September 12, 2007, after holding the record for 31 years, the CN Tower was surpassed in height by the still-under-construction Burj Dubai. It remains the tallest free-standing structure in the Americas, the signature icon of Toronto's skyline, and a symbol of Canada, attracting more than two million international visitors annually.
Links: en.wikipedia.org
1,174 views