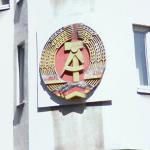 By GlobalPlayer @ 2010-11-21 08:35:23
@ 52.506937, 13.390448
Berlin, Germany (DE)
The National Emblem of the German Democratic Republic featured a hammer and a compass, surrounded by a ring of rye. The hammer represented the workers in the factories. The compass represented the intelligentsia, and the ring of rye the farmers. The first designs included only the hammer and ring of rye, as an expression of the GDR as a communist "Workers' and Farmers' state" (Arbeiter- und Bauernstaat). Surrounded by a wreath, the national emblem also acted as the emblem for the East German National People's Army, and when surrounded by a twelve pointed white star, for the People's Police. It was adopted as the GDR's national emblem by a law of 26 September 1955, and added to the national flag by a law of 1 October 1959. The emblem was officially abolished on 31 May 1990, by a decision of the GDR Parliament (Volkskammer).
Links: en.wikipedia.org
907 views