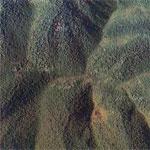 The mountain was made famous by the 1997 novel Cold Mountain by Charles Frazier. A major motion picture based on the novel was distributed by Miramax Films in 2003. The movie was filmed in Romania. Director Anthony Minghella said that the lack of old-growth forests and period buildings was the reason he chose not to film in Western North Carolina.