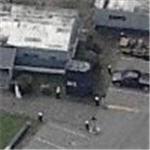 Halfbeak was decommissioned and simultaneously struck from the Naval Register, 1 July 1971. She was sold for scrapping, 13 July 1972.

The USS Halfbeak (SS352) was a sister-ship to the USS Ling and one of the last of the Balao Class to be built.
Links: www.verizon.net
1,440 views