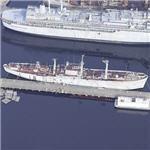 The class was named for the lead ship of its type, the U.S.S. Crater (AK-70) There were a total of 30 ships of this class built, the largest count of U.S. Navy cargo ship classes.

The ships were propelled by a reciprocating engine using a single screw with a shaft horsepower of 1,950.
Links: en.wikipedia.org
1,152 views