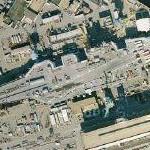 Previously homeported in Norfolk, VA, in May 2008 the carrier was en route to its new homeport in Japan when it suffered a serious fire off the coast of South America causing $70 million in damages and resulting in the relief from command of both its Captain and Executive Officer. The George Washington underwent repairs in San Diego, CA, shortly after the blaze, and finally arrived in Yokosuka on September 24, 2008 to a mixture of cheers and protests from the local populace
Links: en.wikipedia.org
908 views