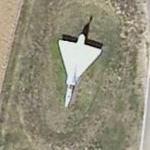 By kjfitz @ 2008-09-12 11:54:39
@ 49.164081, 2.310385
Bernes sur Oise, France (FR)
The Dassault Mirage III is a supersonic fighter aircraft designed in France by Dassault Aviation during the 1950s, and manufactured both in France and a number of other countries. It was a successful fighter aircraft, being sold to many air forces around the world and remaining in production for over a decade. Some of the world's smaller air forces still fly Mirage IIIs or variants as front-line equipment today, including Argentina, Chile, Colombia, Egypt, Gabon, Libya, Pakistan (largest operator), and Venezuela.
Links: en.wikipedia.org, www.airliners.net
511 views