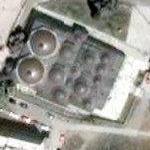 The Macedonian National Gallery is housed in the Daut Pasha Amam (Bath) - an historic monument to the culture of Islam and a fine example of Islamic profane architecture. The construction of the Amam was ordered by Daut Pasha in the second half of the 15th century. The building was originally divided into sections for men and women and possesses a total surface area of 900 square meters. In 1948 the Amam was restored and adapted to its new function as an art gallery.

New reconstruction of the interior were carried out in 1982 and 1999. The first Gallery's permanent collection in 1951 consisted of examples of Macedonian icons (XIV - XIX century), copies of ancient frescoes and models of Macedonian medieval churches, as well as art works of the first generation of Macedonian contemporary artists before WW II and art works from artists from former Yugoslavia. Today's Permanent Collection was created in 2001 as a unique display of the development of the Macedonian fine art from the XIV to XX century.

The National Art Gallery has performed a very significant role and historic role, especially during the early post war years, as the only institution of its kind in Macedonia for the presentation and affirmation of Macedonian fine art. Apart from the regular display of different parts of the collection, the Gallery also presents exhibitions of domestic and foreign works of fine art. The Gallery's international standing has been enhanced through cooperation with important world centers such as Vienna, Venice, Berlin, Istanbul, Dresden, Nuremberg, etc.
Links: www.mng.com.mk
1,873 views