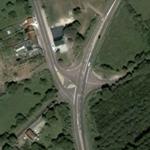 By dda @ 2006-10-03 15:33:24
@ 49.328548, -1.268572
France (FR)
"…As the first American tank reached this intersection and drove toward Carentan, it was struck in the turret by a German rocket. The tank was disabled and the commander, 1st Lt. Walter T. Anderson, was killed. For several days thereafter, the hull remained abandoned at the intersection, with the dead lieutenant hanging out of the turret. The paratroopers at first referred to 'the corner with the dead guy in the tank', but soon shortened it to 'Dead Man's Corner', by which name it will always be remembered."
Links: www.paratrooper-museum.org
2,548 views