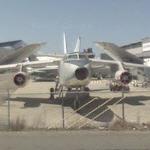 By kjfitz @ 2008-06-20 10:01:29
@ 37.733211, -122.211492
Oakland, California (CA), US
The Douglas A-3 Skywarrior was a strategic bomber built for the United States Navy, and among the longest serving; it entered service in the mid 1950s and was not retired until 1991. For many years after its introduction, it was also the heaviest aircraft ever flown from an aircraft carrier. Its primary function for much of its later service life was as an electronic warfare platform and high capacity tanker.

It also served in the USAF until the early 1970s as the B-66 Destroyer. The Skywarrior is the only Navy strategic bomber to enter service, (the Martin P6M SeaMaster tested well but never entered service due to the obsolescence of the flying-boat platform). Later multi-role aircraft like the A-5 Vigilante could also go on strategic missions.

85 A-3B bombers refitted in 1967 for the tanker role with probe-and-drogue system in place of bombing equipment.
Links: en.wikipedia.org
865 views