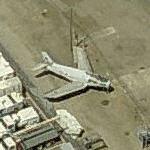 The North American F-86 Sabre (sometimes called the Sabrejet) was a transonic combat aircraft developed for the US Air Force. The F-86 was developed in the 1940s following the end of World War II and was one of the most-produced western jet fighters in the Cold War era.
Links: en.wikipedia.org
645 views