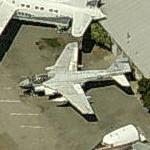 By kjfitz @ 2007-02-25 16:54:46
@ 37.733001, -122.212255
Oakland, California (CA), US
In the early 1970s some 78 A-6As and 12 A-6Es were converted for use as tanker aircraft, providing aerial refueling support to other strike aircraft. The DIANE system was removed and an internal refueling system was added, sometimes supplemented by a D-704 refueling pod on the centerline pylon. The KA-6D theoretically could be used in the day/visual bombing role, but it apparently never was, with the standard load-out being four fuel tanks. Because it was based on a tactical aircraft platform, the KA-6D provided a capability for mission tanking -- the ability to keep up with strike packages and refuel them in the course of a mission. A few KA-6Ds went to sea with each Intruder squadron, and the retirement of the aircraft left a gap in USN and USMC refueling tanker capability.
Links: en.wikipedia.org
1,730 views