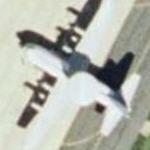 By kjfitz @ 2009-02-17 10:22:06
@ 38.279954, -76.436211
Patuxent River NAS, Maryland (MD), US
The EC-130V Multi-Mission Aircraft combined a C-130H airframe with the APS-125 Radar and Mission System of the US Navy Hawkeye. This aircraft was for counter-narcotics missions requiring greater endurance than the E-2 could provide, but was also evaluated for Search and Rescue, Fisheries Patrols, EEZ enforcement and as a support aircraft for NASA Space Shuttle launches. Externally the EC-130 differs from a standard Coast Guard C-130 with the fitting of a large rotodome housing the APS-125 radar.

Due to budget cuts in the Coast Guard, the EC-130V program was terminated. By mid-1999 the Navy had the plane NAS Patuxent River as a test platform for avionics related to the Navy's Hawkeye 2000 program.
Links: www.globalsecurity.org
656 views