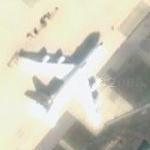 By kjfitz @ 2008-09-06 17:50:11
@ 38.278231, -76.426719
Patuxent River NAS, Maryland (MD), US
TACAMO is a U.S. military term meaning "Take Charge and Move Out". TACAMO refers to a system of survivable communications links designed to be used in nuclear war to maintain communications between the decision makers (the National Command Authority) and the triad of strategic nuclear weapon delivery systems. Its primary mission is to receive, verify and retransmit Emergency Action Messages (EAMs) to US strategic forces. It does this by maintaining the ability to communicate on virtually every radio frequency band from VLF up through SHF, using a variety of modulations, encryptions and networks. This airborne communications capability largely replaced the land based ELF broadcast sites that became vulnerable to nuclear strike.

There are 16 aircraft in the wing. As well as the main base there is a west coast alert base at Travis AFB, California and an east coast alert base at NAS Patuxent River, Maryland. The aircraft fly from these bases to predetermined orbit points over the ocean and hold there in a series of slow 25°-40° banks for six to ten hour missions. With in-flight refueling mission duration can be extended.
Links: en.wikipedia.org
748 views