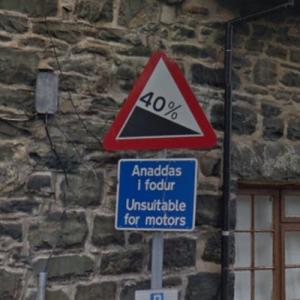 Before it was Baldwin Street in Dunedin, New Zealand that was concidered as the steepest road in the World.

Ffordd Pen Llech is a one way street going downwards from near the castle and down to the carawan park. Only at the carawan park and 180 ft upwards you meet vehicles driving toward you.
A road sign at the beginning saying "unsuitably for motors" in Welch and English and a warning sign saying 40% down.
Links: en.wikipedia.org
112 views