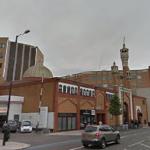 By kkeps @ 2013-04-04 17:19:24
@ 51.51791, -0.065099
Whitechapel, United Kingdom (GB)
The East London Mosque, situated in the inner London Borough of Tower Hamlets between Whitechapel and Aldgate, serves one of the UK's largest Muslim community mainly of Bangladeshi heritage. It lies near the edge of the City of London and a couple of miles from London Docklands. Combined with the adjoining London Muslim Centre, it is one of the largest mosques in the United Kingdom. It can accommodate up to 5,000 worshippers for congregation prayers.
Links: en.wikipedia.org
843 views