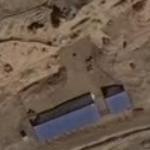 Bamiyan Cliff is located on the north side of the valley, and
includes the two colossal niches that contained the large
standing Buddha figures (55m and 38m), dating from 3rd to
5th century CE, one of the them the tallest in the world.

They were destroyed by the Taliban in March 2001. In
16th century CE, the site is reported to have contained
some 12,000 caves, forming a large ensemble of Buddhist
monasteries, chapels and sanctuaries, along the foothills of
the valley. A preliminary geophysical exploration in 2002
has indicated the presence of ancient roads and wall
structures. In several of the caves and niches, often linked
with communicating galleries, there are remains of wall
paintings. There are also remains of seated Buddha figures.
Links: whc.unesco.org
1,402 views