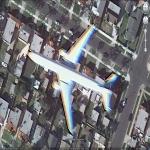 The 777-300ER ("ER" for Extended Range) is the B-market version of the -300. It features raked and extended wingtips, a new main landing gear, reinforced nose gear, and extra fuel tanks. The -300ER also has a strengthened fuselage, wings, empennage, and engine attachments. The standard GE90-115B turbofans are the world's most powerful jet engines in service, with a maximum thrust of 115,300 lbf (513 kN). The maximum range is 7,930 nautical miles (14,690 km), made possible due to a higher MTOW along with the increased fuel capacity. The -300ER can fly approximately 34 percent farther than the -300 with a full load of passengers and cargo. Following flight testing, the implementation of engine, wing, and weight modifications produced an added 1.4 percent reduction in fuel consumption.
Links: en.wikipedia.org
786 views