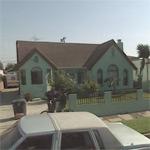 The one-time police mechanic was arrested and charged Wednesday in the serial killing of 10 people over 25 years after a DNA sample from his son was found to bear a close resemblance to DNA found on the victims.

Lonnie Franklin Jr., 57, was charged with 10 counts of murder, one count of attempted murder and special circumstance allegations of multiple murders that could make him eligible for the death penalty if convicted, District Attorney Steve Cooley said.
Links: www.foxnews.com, abcnews.go.com, www.latimes.com
6,708 views

Anonymous
@ 2010-12-18 18:40:13
Zoom in on the cars back window!!!!!! Strange? Trophytrails thinks a picture of a girl is in the backseat? And are those fingers in the window? Google been modifying pictures?