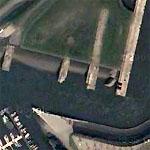 The pens, code named Fink II, were the largest in Germany. 151 meters x 153 meters with a roof 3.5 meters thick, Fink II's five boxes birthed three U-boats each for a total of 15 U-boats of types VII, IX and XXI.

FinkII became the target of an Allied bombing mission for the first time on April 4th, 1945; but emerged from the attack with no significant damage. Five days later, Fink II was attacked a second time, this time with 15 enormous "Tallboy" and two "Grand Slam" bunker busting bombs, with a number of direct hits scored. Despite penetrating the bunker in six places, little damage was done to the subs inside, although two VIIC boats were damaged by shrapnel and one floating dock sunk with U-677 and U-982 in box 5.

Pdunn
@ 2006-04-26 23:03:34
That is odd. I wonder if the original site could have been taken before the area had been dug out. Evidently, the thick walls of the old pens wreaked havoc on Airbus' efforts to extend the runway, causing extensive delays.