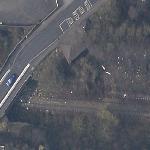 What's left today:
Most of the station has been demolished, although the station building at street level is still extant. The platforms and other sections of the atation at track level have been demolished and the track bed is badly overgrown, but the double tracks still remain under the overgrowth. Further down the former railway you can still see and enter a nearby tunnel.
Links: www.disused-stations.org.uk
420 views