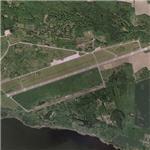 By kjfitz @ 2007-09-20 15:59:00
@ 54.263733, 12.43839
Pütnitz, Germany (DE)
In 1934, Walter Bachmann moved his airplane repair and production business from Rostock to Ribnitz. The company was specialized in seaplanes, for which nearness to open water was essential. The Walter-Bachmann-Flugzeugbau KG, as it was later called, turned the fisher's and farmer's town into a seat of war-essential production. The influx of workers for the factory, among other factors, increased the population of Ribnitz from 4772 in 1930 to 8925 in 1942.

At the same time as the Bachmann works in Pütnitz, near Damgarten, an air force base was built. Like the Bachmann works for Ribnitz, so did they increase Damgarten's population, which doubled from 1933 to 1939. Primarily it was a training center for seaplane personnel. After World War II, this base became one of the major deployments of the Soviet Air Forces in East Germany.
Links: en.wikipedia.org
1,077 views