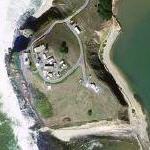 The AN/FPQ-6 is a Missile Precision Instrumentation Radar (MIPIR) class monopulse tracking radar used to provide position data on aircraft, missiles, space boosters, and orbiting bodies. The site can track in either skin mode or in conjunction with vehicle-borne transponders. The radar's large antenna and high power coherent transmitter make the site's data quality very high. The sensor can also provide Doppler-derived range rate data on skin or coherent transponder tracks. Non-owners may utilize the services of the radar, but site operations and maintenance is limited to the Western Range contractor.

The California Coast has few protective points. Pillar Point is one of them. The Point at night with its string of lights looks like the largest battleship in the American fleet. On top of the point is the Pillar Point Air Force Station. Beneath the tracking station is the harbor. It is the only harbor between San Francisco and Santa Cruz. This natural harbor has been used by coastal fishermen for centuries, but the harbor, with its tracings of rip-rap breakwaters, was first constructed in 1961. The inner breakwater was added in 1982.
Links: www.globalsecurity.org
7,379 views