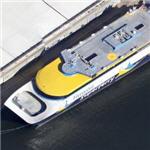 On July 2, 2009 a Delaware Bankruptcy Court granted the company's motion to abandon both the Alakai and Huakai, ending all possibilities that the company might return to Hawaii; the ships were bought by the US Maritime Administration in 2010, and the US Navy has expressed interest in buying them from MARAD.
Links: en.wikipedia.org
794 views

kjfitz
@ 2010-11-26 15:54:21
This ship has been captured in VGT before delivery and now after retirement:
http://virtualglobetrotting.com/map/hawaii-superferry-alakai-pre-delivery/