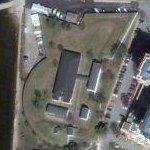 The fort helped protect Norfolk during the War of 1812. In the Civil War, Confederate forces seized the fort and used its magazine to supply the CSS Virginia (Merrimack) during its battle with the USS Monitor. In 1862 the fort was recaptured by the Union Army and used as a prison. Later it was an ordnance depot for the Navy. In 1923 the fort was occupied by the U.S. Army Corps of Engineers, which still owns Fort Norfolk.
Links: www.nao.usace.army.mil
805 views